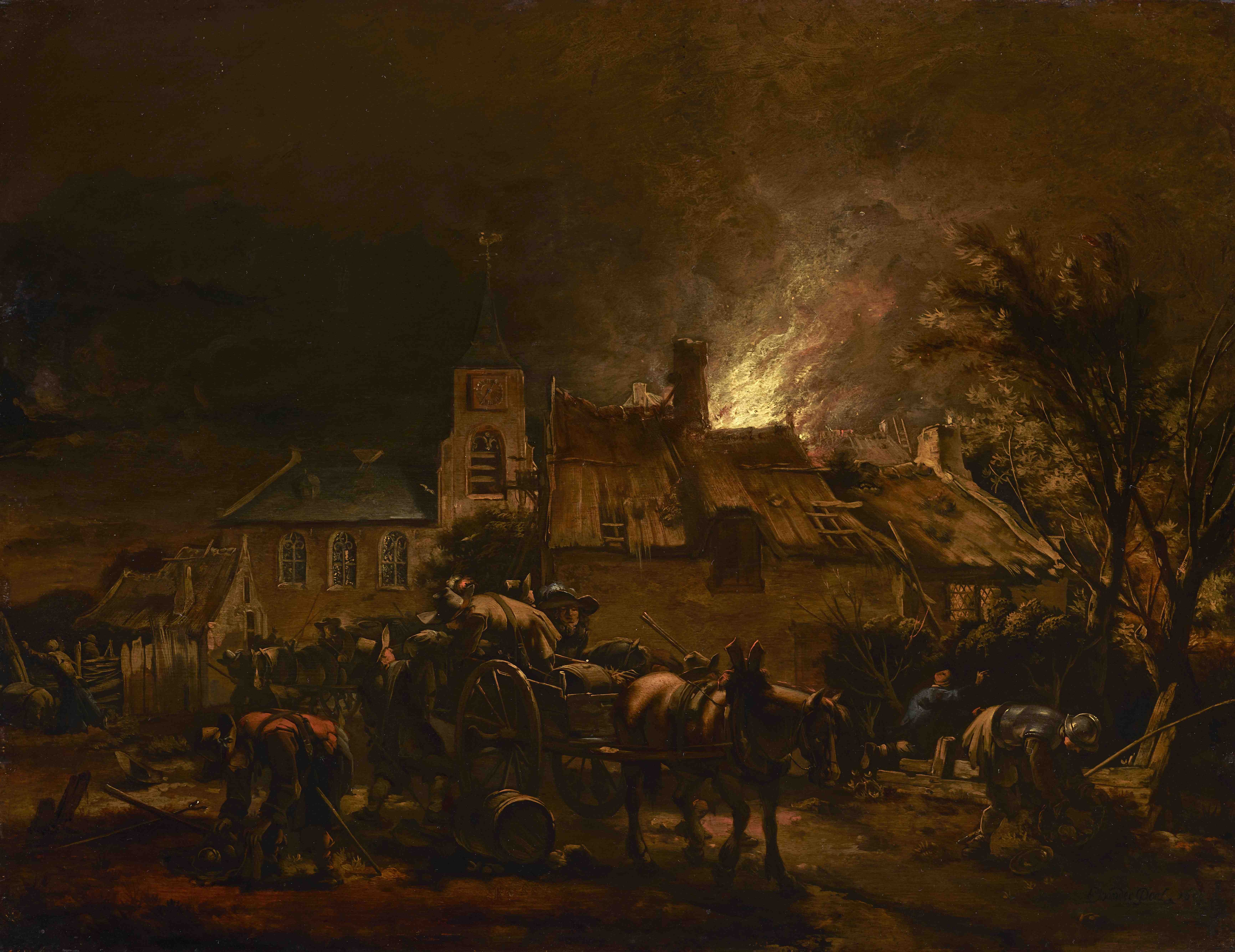 A fire in a Village at Night.


Egbert van der Poel was a painter specializing in a niche-sub-genre of 17th century landscape painting; city and village fires at night.

Our painting clearly reflects van der Poel’s eye for detail and his fascination with ‘fire’. To van der Poel each blazing fire made for a dazzling spectacle, with its contrast between the darkness of the night and a radiant sea of flames. It takes time for the eyes to get used to the darkness of the painting, after which many previously invisible details seem to come into view.

Unusually there was a lively market for these scenes of fire, a seventeenth-century variant of today's 'disaster tourism'. Van der Poel painted a significant number of these fires “Vuurtjes” and became known as a skilled 'fire painter'. The technique of portraying fire was discussed as a separate theme in painting manuals, with the correct use of color and careful observation of real fires as main points of emphasis.

The present painting is the perfect example of a textbook “Vuurtje”; the viewer's eye is initially drawn to the flames shooting from the thatched roof of a village housed next to a church. Its glow spreading countless burning embers. Could the fire spread to the church? Residents try to save themselves and some of their belongings with the help of bystanders. Household goods are piled high on a horse cart. Plumed firefighters try to extinguish the fire. The hectic atmosphere created by the fire is palpable – Egbert Lievensz. van der Poel has successfully captured every aspect of this village fire.

Van der Poel was born in Delft in 1621. In 1650 he registered with the Guild of Saint Luke in Delft, but after the devastating explosion of a powder magazine on October 12, 1654. he decided to leave the city and settle in Rotterdam. Today van der Poel is largely known for his paintings of this devastating event (fig. 1). The artist himself lost a child during the explosion of Delft and perhaps this explains, from 1654 onwards, his fascination for disasters, as evidenced by his numerous paintings of village fires, and the many paintings he made of the gunpowder explosion in his hometown.

Although some contemporaries such as Aert van der Neer painted night scenes of fires, Van der Poel brought ‘fire’ to the foreground of his compositions making it the central subject. By zooming in on the fire in this way, Van der Poel was also able to pay more attention to the details that make his scenes lively like no other painter. Fire in the Night is one of his more carefully executes paintings, in a beautiful state of preservation.