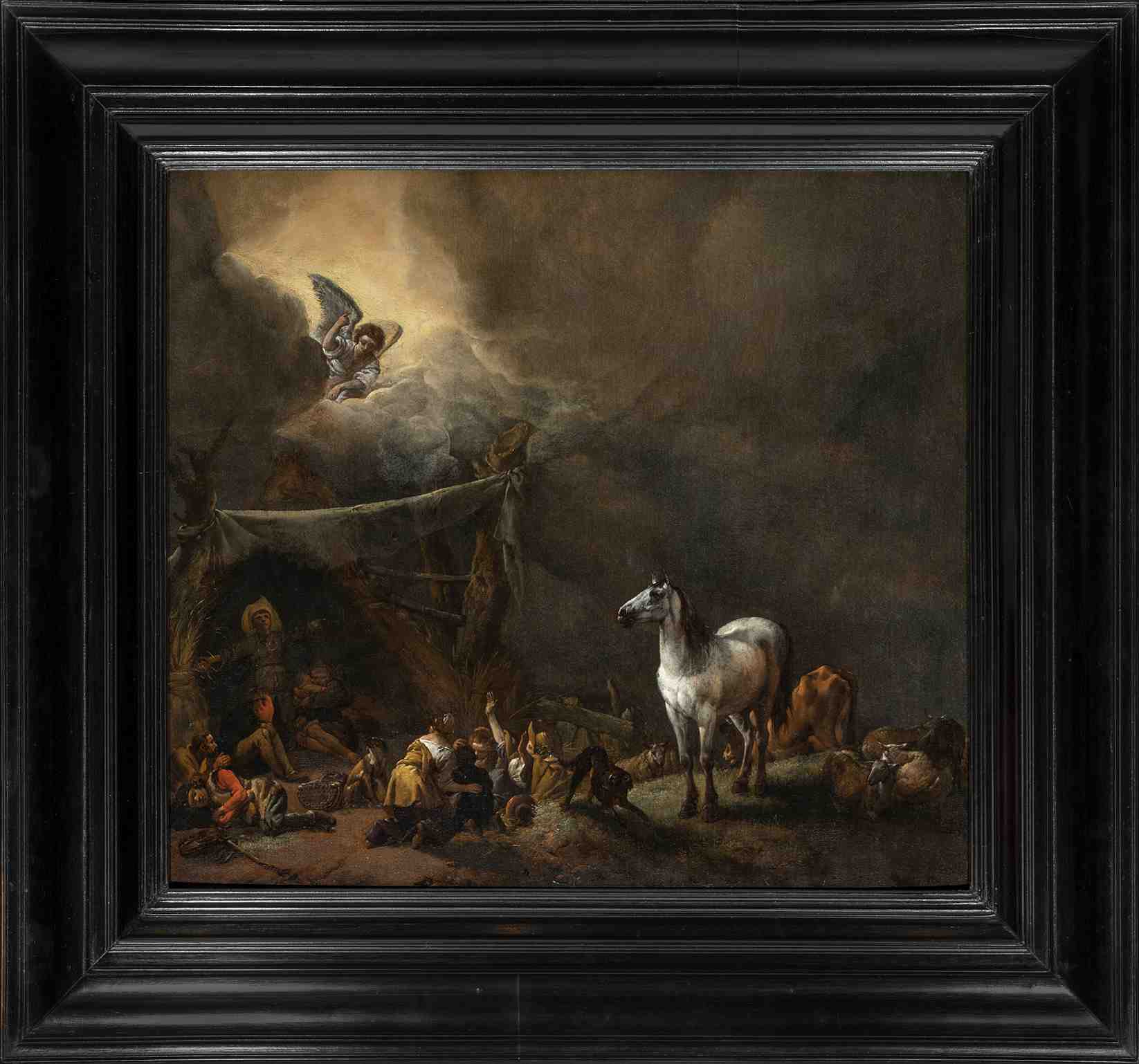 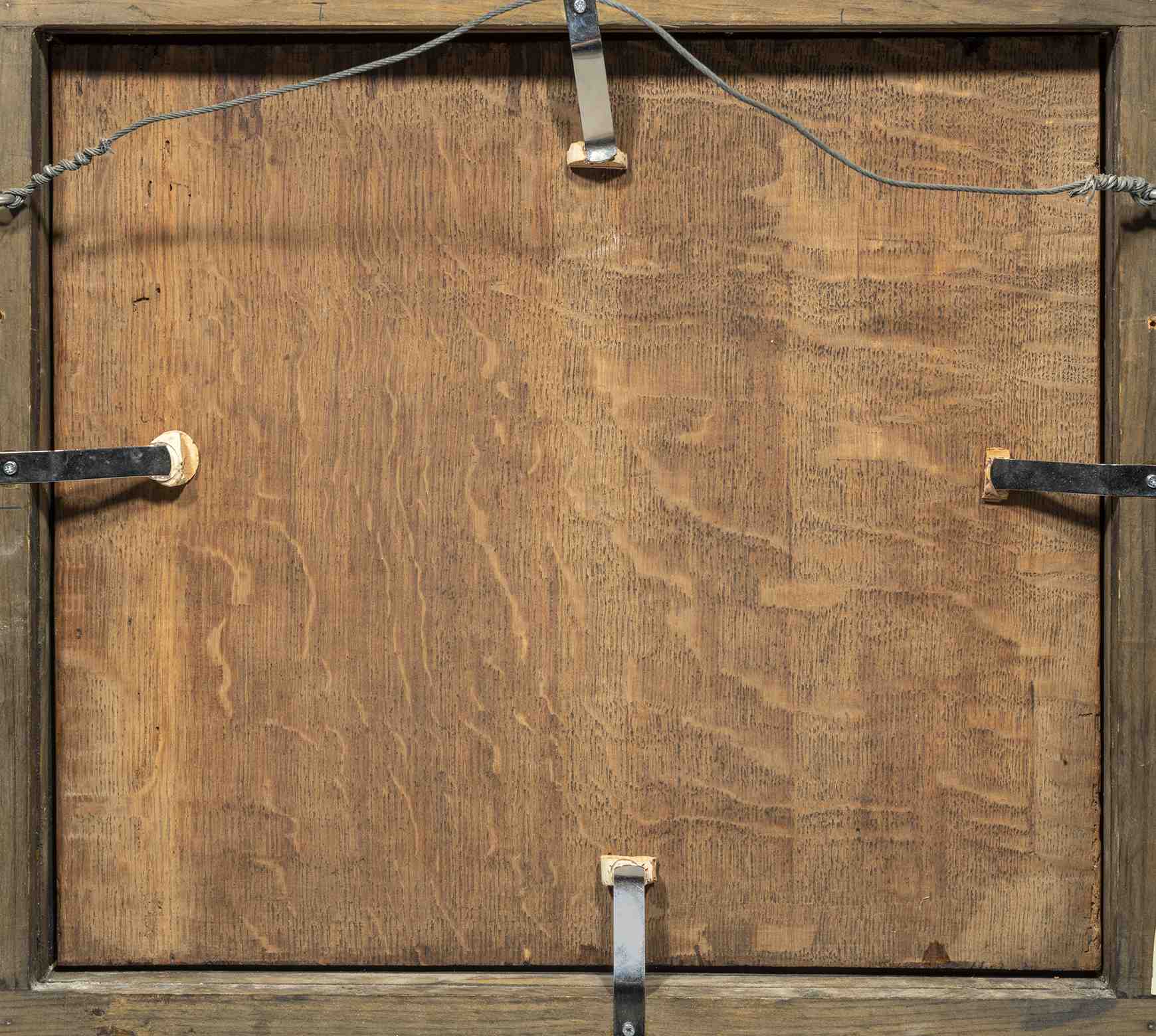 Annunciation to the Shepherds.


Philips Wouwerman (1619-1668) of Haarlem, became a member of his native guild in 1640. He specialized in depicting horseback scenes, but his repertoire also included riding schools, horse markets, farrier’s shops and stable interiors and a few religious subjects painted in his early years, around 1645-1655.

Six paintings have the Annunciation to the Shepherds as their subject. Apart from the present work, these are paintings in the Louvre in Paris, National Gallery of Ireland in Dublin, two in private hands, and one whose current whereabouts is unknown.

Although they differ in composition, they contain the same components: an angel in the sky, surrounded by bright light, and underneath a tent or hut around which shepherds are grouped, and a herd with the emphasis on one or two horses, one of which is always a grey. And all of this powerfully modelled with strong light-dark contrasts.

‘And she gave birth to her firstborn son and wrapped him in swaddling clothes and laid him in a manger, because there was no place for them in the inn. And in the same region there were shepherds out in the field, keeping watch over their flock by night. And an angel of the Lord appeared to them, and the glory of the Lord shone around them, and they were filled with great fear. And the angel said to them, “Fear not, for behold, I bring you good news of great joy that will be for all the people. For unto you is born this day in the city of David a Savior, who is Christ the Lord’.

The description of Jesus life in the Gospel of Luke begins with the above lines. This well-known Bible passage is the subject of this wonderful painting. In a bright light, an angel appears at the top left, leaning over a bank of clouds and pointing with his right hand to this divine light.

Below him, in a makeshift hut and in the open field in front of it, shepherds and their wives and children are awakened from their sleep. Some are still in a deep rest, others are in drowsy confusion, shrinking frightened or reacting ecstatically to this special event. The cattle on the right have also woken up and the white horse, prominently displayed in the foreground, even seems to be attentively taking in the message.

Wouwerman’s present work comes from the famous Cook Collection. This collection of paintings assembled by Sir Francis Cook (1817-1901), owner of the wool, cotton, linen and silk firm ‘Cook, Son & Co’. In 1849 he bought the eighteenth-century Doughty House in Richmond, to which, in 1885, he built a 38-metre gallery to house his collection. Collecting paintings from 1868, eight years later he had already acquired 510 important paintings.

Thus, the Annunciation to the Shepherds was shown there. In 1958, the Wouwerman, together with the 135 other works then still present, was auctioned in London. The new owner was the renowned Dutch art dealer Hans Wetzlar (1894-1970), who included the painting in his private collection, housed in his Amsterdam residence on Roemer Visscherlaan.

Philips Wouwerman left an extensive painted oeuvre. At present, approximately 600 paintings by his hand are known. Many of these are now in museum collections. The fact that an authentic top piece by this renowned horse specialist, with a subject that was not commonplace for the artist and with an outstanding provenance, is now being offered for sale from a private collection, can safely be called exceptional.